Noted for the "fiery intensity" and "poetic vision" of his playing, Cyrus Forough's reviews comprise a lexicon of superlatives in more than a dozen languages. Mr. Forough is a laureate of the Tchaikovsky International Competition, first prize winner of the Milwaukee Symphony Violin Competition, and finalist in the Munich International Violin Competition. He has performed on radio and television internationally and given command performances for international dignitaries. He and his wife Steinway Artist Carolyn McCrackenwon the United States Artistic Ambassador Program's National Duo Competition, representing the United States in the Far East and South America and performing in prestigious U.S. venues.

An active performer of contemporary music throughout his career, Forough gave the Milwaukee Symphony's premiere of the Shostakovich First Violin Concerto with Paul Polivnick conducting. In 2010, he performed Lutoslawski's Chain 2 with the Carnegie Mellon Philharmonic under Ronald Zollman. Mr. Forough recorded Alireza Mashayekhi's fourth violin concerto in September 2016 with the Ukraine National Symphony, Vladimir Sirenko conducting. Mashayekhi's fourth and fifth violin concertos and his fourth Violin/Piano Sonata are dedicated to Cyrus Forough. He premiered the sonata along with other Mashayekhi compositions in a November 2017 recital at the ISSUE Project Room in Brooklyn, NY. Other composers who have dedicated works to him are Reza Vali and Alan Fletcher.

Mr. Forough's unique succession of studies, in three major international cultural centers with three of the twentieth century's legendary violin masters, has made him a prominent representative of the Franco-Belgian school of violin playing. Beginning his studies with his mother, herself a violinist and graduate of the Royal Conservatory of Music in Brussels, he became the youngest student ever to attend that same conservatory when he was admitted at age nine to the class of Arthur Grumiaux. He later studied with David Oistrakh and Josef Gingold.

Mr. Forough's dedication to teaching and his skill at communicating his art have earned him a reputation as a sought-after and effective violin pedagogue. At present he is a Professor of Violin at Carnegie Mellon University in Pittsburgh,and was a visiting professor at the Eastman School of Music in 2009, 2010, and 2015. He has performed and taught at festivals in over twenty countries, and his students are prize winners of national and international competitions and members of professional orchestras worldwide. 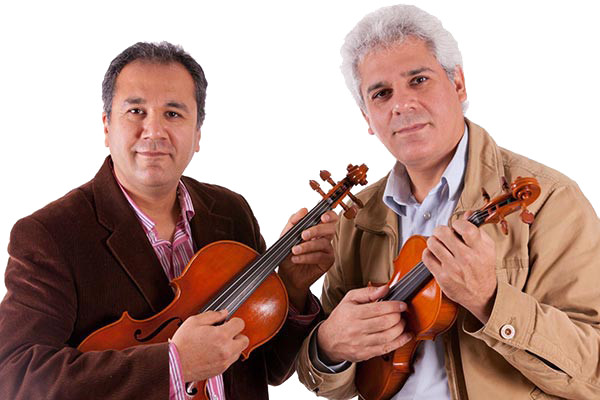 Co-founders of Rezvani Violins, Shahram and brother, Saeid Rezvani were introduced to the world of music at an early age in their native Persia where they developed a great love and a deep respect for both Western and Eastern classical music. Their love and passion for music grew so strong that, one after the other beginning in 1990, the two brothers dedicated their lives to learning and mastering the art of violin making and restoring stringed instruments under the supervision of the best and most well-known violin makers in Austria, becoming student apprentices to Maestros Eton Watlow and Johann Rombach in Vienna.

Now, with nearly twenty-eight years of successful experience, the Rezvani brothers have achieved their well-deserved reputation as Master Luthiers. More than six hundred of their specially crafted masterpieces are owned by soloists and professional orchestral musicians throughout the world, as well as numerous members of music conservatoires, tenured faculty and professors of music in university music departments and performers in numerous philharmonic and symphony orchestras in the United States and abroad.

In early 2010 Rezvani Violins relocated to Westlake Village, California, where they now create and continue to focus on producing violins, violas and cellos as well as offering the best sales, repairs and restoration of stringed Instruments and bows.